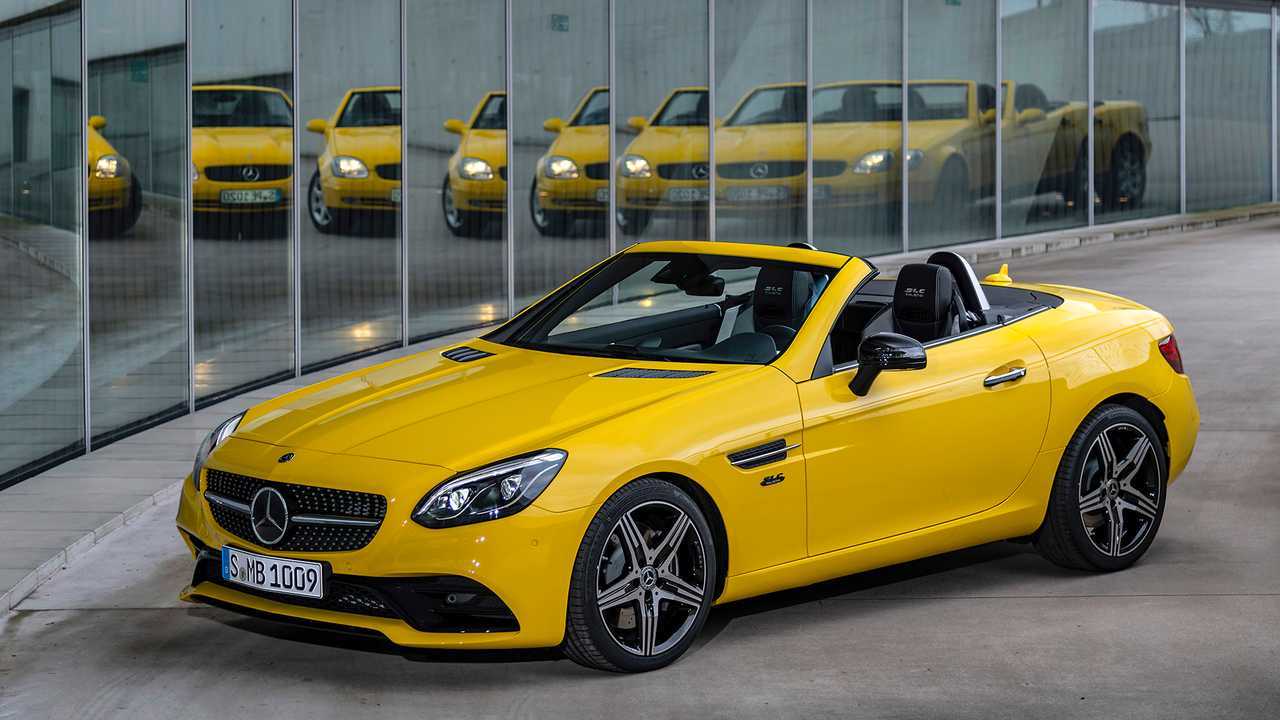 Let the sun shine in: special edition of an iconic roadster

Stuttgart. When the SLK first appeared as a production model in 1996, it caused a sensation and founded a new generation of roadsters. For the first time, Mercedes-Benz had produced a roadster whose vario-roof redefined the roadster segment by combining open-air driving pleasure with uncompromised comfort in poor weather that had never been available before. Furthermore, the SLK started its career in the launch color Yellowstone, an unusual choice for Mercedes-Benz. In honor of this world premiere, the Final Edition of the AMG SLC 43 is available in the exclusive paint finish Sun Yellow. Boasting an extensive range of equipment and unique interior details, the special edition of the SLC marks the pinnacle of the current model generation. The 2020 Mercedes- Benz and Mercedes-AMG SLC Final Edition will arrive in U.S. dealerships in 2020.

The special model is based on the AMG Line, which includes AMG Styling bumpers at the front and rear, a sport suspension with 10 mm lowering as well as a larger braking system with perforated brake discs and front calipers sporting "Mercedes-Benz” lettering as standard equipment.

A striking combination of two-tone Nappa leather in Black/Silver Pearl with Grey topstitching characterizes the interior and can be found on the standard- fit sport seats, the door trim and the door center panels, among other areas.

February 19, 2019he Grey seat belts echo the color of the topstitching. Carbon-fiber look leather inserts in the head restraints and the upper section of the seatbacks round off the exquisite interior design of the SLC Final Edition.

The head restraints and the selector lever of the automatic transmission are covered with carbon leather and bear silver SLC lettering. The trim elements on the instrument panel and the center console sport a bright aluminum finish. The standard-fit multifunction sport steering wheel combines carbon leather in the upper and lower segment with smooth nappa leather in the grip area. Sporty details of the steering wheel are the flat bottom, the 3-spoke design, the black paddle shifters and the spoke faceplate with "Mercedes-Benz” lettering.

Other standard appointments of the Final Edition include black floor mats with an embroidered logo, AIRSCARF neck-level heating, seat heating, and the Memory package for the seats, steering column and exterior mirrors. Furthermore, the package includes 4-way lumbar support for the driver and front passenger.

The Final Edition of the AMG SLC 43 emphasizes the racy appearance of the performance roadster with the exclusive Sun Yellow paint finish and a host of high-gloss black elements, among other features. These include: the front splitter, the fins of the air intakes and the fenders, the base of the centrally positioned star, trim elements in the rear fascia, the side mirror caps and door handles. Matte black 5-spoke AMG light-alloy 18-inch wheels with yellow rim flange and tires of size 235/40 R 18 at the front and 255/35 R 18 at the rear further underscore the sporty character of the roadster.

The two-tone leather appointments in Black/Silver Pearl with Grey topstitching and seatbelts, as well as carbon-fiber look leather applications, provide visual highlights in the interior. The AMG Performance steering wheel with carbon- embossed leather in the upper and lower segment, as well as Nappa leather in the grip area, features a crystal grey 12-o'clock marker and an additional "AMG EDITION” badge on the steering-wheel trim. The AMG Final Edition of the

SLC 43 has numerous comfort features from series production, including AIRSCARF neck-level heating, seat heating for the driver and front passenger as well as the Memory package for the exterior mirror, seat and steering column settings.

A success story for over 20 years: Mercedes-Benz SLK and SLC

After its launch in 1996, the SLK marked the start of a new era for the traditional Mercedes-Benz brand, and its roof design served as a model for many other open-top vehicles.

In January 2011, Mercedes-Benz presented the third model generation, currently still in production, which bears the in-house model code R 172. This series combines light-footed sportiness with stylish comfort, and striking sports car design with absolute day-to-day suitability. From April 2016, the SLC appeared as a technically and visually optimized further evolution. The name change acknowledges the close relationship with the C-Class, with which the roadster shares many of its technical features. A resounding success: the model series has a worldwide community of fans, with sales of over 710,000 units since 1996.

The model history at a glance: