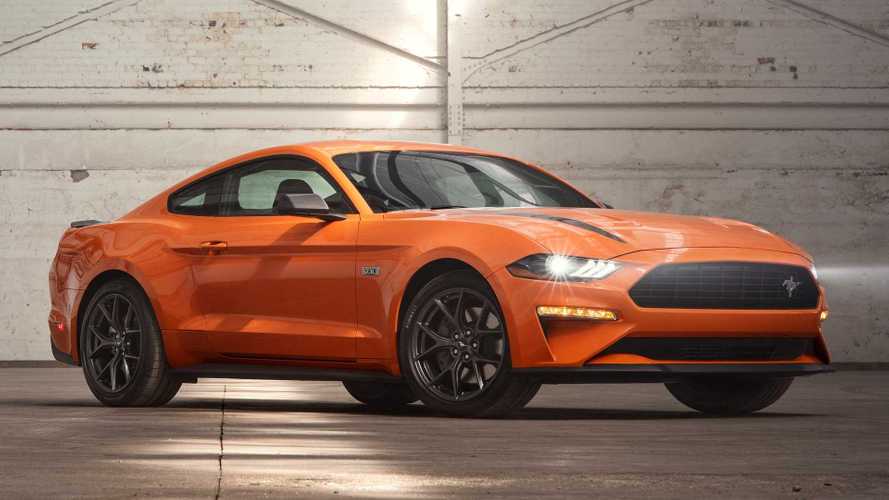 DEARBORN, Mich., April 15, 2019 – Strengthening Ford’s performance reach for 2020 and just in time for the pony car’s 55th anniversary, the new 2.3L High Performance Package for the entry-level Mustang EcoBoost® creates the most powerful four-cylinder sports car offered by an American automaker. This is the result of a unique EcoBoost engine powered by Ford Performance and upgraded handling components from the Mustang GT Performance Package.

“The Ford Performance Focus RS 2.3-liter engine is a high-revving marvel, and anyone who’s driven this EcoBoost engine instantly loves how quickly it responds and delivers power,” said Carl Widmann, Mustang chief engineer. “When our team got the chance to try this specially built engine in a Mustang, we immediately agreed, ‘We have to do this.’”

Reminiscent of development of the original Mustang in 1964, the car began as a five-person skunkworks project in the Ford Performance garage. Following an experiment with a Focus RS engine swap, the Mustang team leveraged Ford’s quickening product development times to accelerate and complete the design-to-approval process for the 2.3L High Performance Package in under 10 months.

Available on the entry-level Mustang EcoBoost fastback coupe or convertible models this fall, the Mustang EcoBoost package was developed to feel at home both on thrilling mountain and coastal roads and even on the most precise autocross courses thanks to its Mustang GT brakes, performance tires, and chassis and aerodynamics hardware from the Mustang GT Performance Package.

Most powerful EcoBoost engine yet in a Mustang

To make their project a reality, members of the Mustang team traveled to Valencia, Spain, home of the Ford Performance-tuned 2.3-liter engine, to convince plant management to build a new variant of the turbocharged four-cylinder specifically for Mustang. Then, with the Ford Performance-designed engine as a starting point, they tuned the EcoBoost to more broadly and responsively deliver a projected 330 horsepower and 350 lb.-ft. of torque achieved with premium fuel (per the SAE J1349 standard).

Having secured production of the die-cast alloy block and high-performance cylinder head, the engineering team specified a 5 percent larger 63-millimeter twin-scroll turbo compressor and a larger radiator, then calibrated the engine to run both Ford’s 10-speed SelectShift® automatic and 6-speed Getrag manual transmission.

“It’s not just the horsepower gains over the standard 2.3-liter EcoBoost, it’s the broader torque curve that delivers 90 percent of peak torque between 2,500 and 5,300 rpm, which is 40 percent wider than the base EcoBoost engine,” said Widmann. “Plus, horsepower holds stronger up to the 6,500-rpm redline – enabling more usable power and torque for enthusiasts and weekend autocrossers to enjoy.”

The new 2020 2.3L High Performance Package feels sharp and nimble, with an aggressive road-holding stance, near-balanced 53/47 weight distribution and fully independent suspension, plus chassis and aerodynamic upgrades from the Mustang GT and its Performance Package.

For greater steering precision, the team added an alloy strut tower brace to stiffen the chassis at the front. To improve stopping power and fade resistance, the 2.3L High Performance Package adds larger four-piston fixed calipers with 13.9-inch front rotors from Mustang GT. It features a 32-millimeter solid sway bar up front and a tubular 24-millimeter bar at the rear.

An engine-spun aluminum instrument panel with oil pressure and turbo boost gauges, plus a serialized dash plaque highlight the interior.

The new EcoBoost Handling Package is available exclusively on the 2020 Mustang EcoBoost fastback coupe with the 2.3L High Performance Package with either 6-speed manual or 10-speed automatic transmission.

FordPass Connect™, now standard on Mustang for 2020, allows owners to interact with their vehicles via a smartphone. Using FordPass Connect’s phone application, owners can locate their parked car, lock and unlock it, and check vehicle status, such as fuel, oil levels and maintenance alerts. For automatic transmission-equipped Mustang models, the system has a remote start feature. The availability of these features varies by market.

The 2020 Ford Mustang with 2.3L High Performance Package arrives at dealerships this fall.