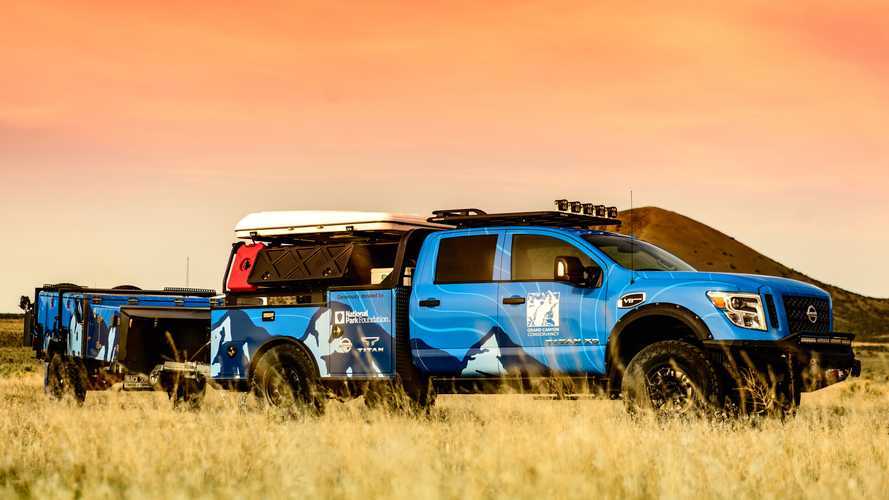 FLAGSTAFF, Ariz. (May 16, 2019) – In the Grand Canyon’s 100th year anniversary as
a national park, there is another cause for celebration. Nissan today revealed the
Ultimate Parks TITAN, a purpose-built park support vehicle that will be donated to the
Grand Canyon Conservancy through Nissan TITAN’s partnership with the National Park
Foundation.

The Ultimate Parks TITAN is the final modified TITAN donated to national nonprofit
partners as part of the Calling All TITANs campaign. The others include the Ultimate
Service TITAN for the American Red Cross and the Ultimate Work TITAN created for
Habitat for Humanity.

The Ultimate Parks TITAN build, like the previous two projects, started with an
understanding of the specific tasks at hand. For use in the Grand Canyon National Park,
which is known for areas often reached only by pack mules, sure-footed traction and
efficient load carrying were priorities. The Ultimate Parks TITAN is built off of a 2019
Nissan TITAN XD Gas PRO-4X Crew Cab and is designed to transport five people and a
host of park equipment deep into the Grand Canyon National Park’s remote areas.

“The Ultimate Parks TITAN is a physical manifestation of the support Nissan is providing
to parks and park champions coast to coast,” said Will Shafroth, president of the
National Park Foundation. “From the Grand Canyon, to the Great Smokies, to Glacier Bay
in Alaska, Nissan’s support bolsters the critical work of local partners connecting youth to
parks and service corps helping to restore these treasured places.”

Housed inside the service bed are a range of special repair tools and equipment,
including a Miller EnPak welder, air compressor and generator. Completing the
equipment list are a WARN Industries ZEON Platinum 12-S Winch for getting the vehicle
out of tight or low traction spots. Also included are custom Baja Designs worksite lighting
and Addictive Desert Designs HoneyBadger front bumper.

In the tradition of packing it in and packing it out, the Black Series Camper off-road
trailer provides additional cargo capacity. Other helpful features of the specially outfitted
trailer include a CargoGlide bedslide, Leitner Designs bed rack, Rhino Rack Batwing
awning and CVT hard shell tent.

The Ultimate Parks TITAN’s maximum payload is rated at 2,990 pounds with a maximum
towing rating2 of 11,680 pounds – so taking a trailer full of equipment and supplies is no
problem. Among the list of TITAN XD’s available towing aids are an Integrated Trailer
Brake Controller, Trailer Sway Control (TSC), Tow/Haul Mode with Downhill Speed
Control and a Trailer Light Check system that allows one-person hook-up operation –
checking turn signals, brake lights and running/clearance lights from inside the TITAN
cab or with the key fob.

Literally wrapping up the Ultimate Parks TITAN build is a custom full body and trailer
wrap. The unique design features topographical lines from the north rim of the Grand
Canyon set against a National Park Foundation signature blue background.

“The Ultimate Parks TITAN is as impressive a vehicle as the work provided by the Grand
Canyon Conservancy in one of the most amazing national parks in the country,” added
Castro. “We can’t wait for it to be put to work by the exceptional men and women
improving our national parks every day.”

The Ultimate Parks TITAN will be on display during the 2019 Overland Expo West, May
17 through 19, at Ft. Tuthill County Park in Flagstaff, Ariz.