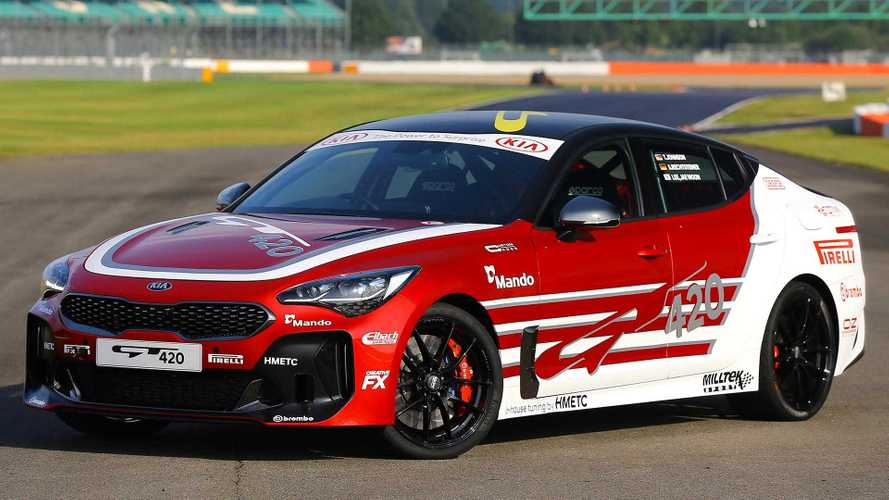 Images are for editorial use only and not for promotional purposes. Agencies who supply images to Newspress must ensure they have the appropriate permissions.
Created by Kia Motors UK with advice and engineering assistance from Hyundai Motor Europe Technical Centre in Rüsselsheim, Germany
Stiffer and lighter to create a track day monster
Power increased from 365bhp to 422bhp
Maximum torque raised from 510 to 560Nm
‘Stinger GT420’ made its debut at Silverstone on 24 July 2019
Most off the cuff remarks, or pie-in-the-sky ideas get dismissed as soon as they’ve been spoken of. It’s all well and good having big plans, as long as you’ve got the time – and usually the budget – to follow them through. This is where big, brave concepts normally fall by the wayside, or are parked for another day, or usually indefinitely.

But this is Kia Motors UK and they are known for doing things a little differently, and so when it came to ordering the truck to take the very first Stinger in the UK to the crusher at the end of 2018, there was an unfortunate and mysterious delay in creating the required paperwork. In the background, while it sat in the showroom at Kia’s headquarters, heads from the Product and Press Relations team were pressed together to discuss ways of sneakily keeping the HiChroma Red ‘GT S’. After all, it had an interesting history, having been air-freighted to the UK early in 2017, as it was the pre-production homologation car that then underwent countless tests to prove its integrity as Kia’s brand-new flagship.

Wearing the plate LA66 HTG and registered on Wednesday 22nd February 2017, it went on to become the cover car of many UK publications, having been photographed at the Longcross proving ground in Surrey. Its stardom was assured thanks to its appearance on both BBC ‘Top Gear’ and Amazon’s ‘The Grand Tour’ television programmes. Members of the public were also able to clamber over this early car, as it was used as a dealer roadshow vehicle at Kia showroom unveil events up and down the country. Normally pre-production cars cover a couple of thousand miles, but this well used example has clocked up an impressive 10,000 miles.

Most importantly, this was the car that was used for final testing and tuning in the UK, with the engineering sign-off being carried out here by none other than Albert Biermann, Head of Research & Development Division for Hyundai Motor Group.

Today, Kia is revealing the backroom work from a company full of enthusiastic petrol heads, who conjured up a compelling proposal and had it approved by supportive Kia Motors UK senior management. A collaboration between the UK product, press relations, UK press garage and technical team, this 50:50 project was completed with the help, advice and engineering knowhow from the Hyundai Motor Europe Technical Centre in Rüsselsheim, Germany. A team led by Head of Vehicle Test and Development, Tyrone Johnson, who is famed for his work on fast hatchbacks bearing a blue oval, until he joined Hyundai Motor Europe in August 2018.

Muscular fastback to track special
All of the ingredients for creating the eye-catching ‘Stinger GT420’ were already in the car’s DNA, created by Kia engineers at the company’s Namyang development centre in Korea. A meaty 3,342cc V6 twin-turbocharged petrol engine with direct injection develops 365bhp and 510Nm out of the box, and that’s even before it has been breathed upon.

HMETC powertrain team were involved from the start to tune the Stinger GT S track car, and they recommended HKS M45il spark plugs for enhanced combustion. A K&N sports air filter and a lightweight Milltek Sport quad-exit exhaust system with catalysts deleted were fitted in place of the factory item. A six-row automatic transmission cooler is fitted, in place of a four-row item, ensuring that the automatic transmission doesn’t overheat and is up to the job on track. The transmission software was recalibrated to have quicker shifting characteristic in Sport and Sport+ modes. These measures bring the vital statistics up to a whopping 422bhp and 560Nm of torque, but any racer knows that lightness is key to making the most of this additional performance.

Kia’s Press Garage in Chippenham stripped out the interior of the Stinger, removing the seats and belts, airbags, sound system, interior trim and rear window regulators. The engine cover, undercovers, parking sensors, boot and bonnet dampers and rear bumper beam and foam were also taken out, while the rear windows were glued into place and lightweight door cards installed. The Stinger’s sunroof was removed and replaced by a steel panel, shaving off a few more vital kilograms, even after a honeycomb panel was grafted in by Hyundai Motor Europe to add essential reinforcement to the panel. There is a total weight reduction of approximately 150kg after the installation of the roll cage, seats, belts and fire extinguisher.

A custom roll cage was installed and painted and the crash pad and necessary electronics re-assembled. Underbody stiffening comprises of a cross bar at the front and a pair of bars at the rear. With the roll cage in place, a pair of Sparco race seats were bolted into place, along with race belts and the all-important fire extinguisher mounted within the cockpit, should the worst happen. Completing the weight saving measures, a Lite Blox LiPo battery is installed to replace the original item, saving 22kgs.

Glued to the track
The weight saving continues with the fitment of wider OZ Racing Leggera rims saving approximately 5kg per wheel, and Pirelli Trofeo R tyres were selected for maximum adhesion on the track – 235/35/R19 at the front and 265/30/R19 at the rear. The camber angle was increased to -2.5 degrees by modifying the front cross-member, and uprated front brakes saw Brembo six-pot calipers and racing steel flex pipes fitted, along with high performance 380 x 34mm discs and Endless pads. At the rear, the standard Stinger V6 brakes were utilised. Cooling ducts and deflectors make sure that the brakes have the maximum cooling capacity needed on the race-track and tweaks to the anti-lock brakes, traction control and electronic stability control ensures that they deliver optimum performance for on-track use. In Sport+ mode and by switching the traction control and electronic stability control off completely, the ‘Stinger GT420’ becomes easy to drift.

The standard dampers were used for the racing set up, with Eibach Pro lowering springs and anti-roll bars of 25mm at the front. At the rear, an 17mm in-house anti-roll bar was fitted. The continuous damping control was axed in favor of a conventional damper set up with some fine tuning.

Adding the final flourishes
Once the mechanical upgrades were signed off, the Kia Press Garage set to work giving the ‘Stinger GT420’ some extra visual muscle. A Stillen front splitter and rear diffuser were added, along with a rear spoiler by Air Design. But the final pièce de résistance is an eye-catching wrap that integrates nicely with the existing HiChroma Red paintwork, adding white and graphite grey elements, advertises the race-spec upgrades and reveals the ‘GT420’ name. Every inch the racer, it looks sensational from every angle.

How much did it cost?
With a project that is completed outside of normal business, and the involvement of Hyundai Motor Europe’s technical team, it’s hard to say exactly how much time and money has been spent on the ‘Stinger GT420’. The amount of blood, sweat and tears expended on this project cannot be counted in a monetary sense and therefore a definitive price is hard to quantify on a project as unique as the ‘Stinger GT420’. Kia’s current tagline could have been created just for this project – The power to surprise – and you bet it does.