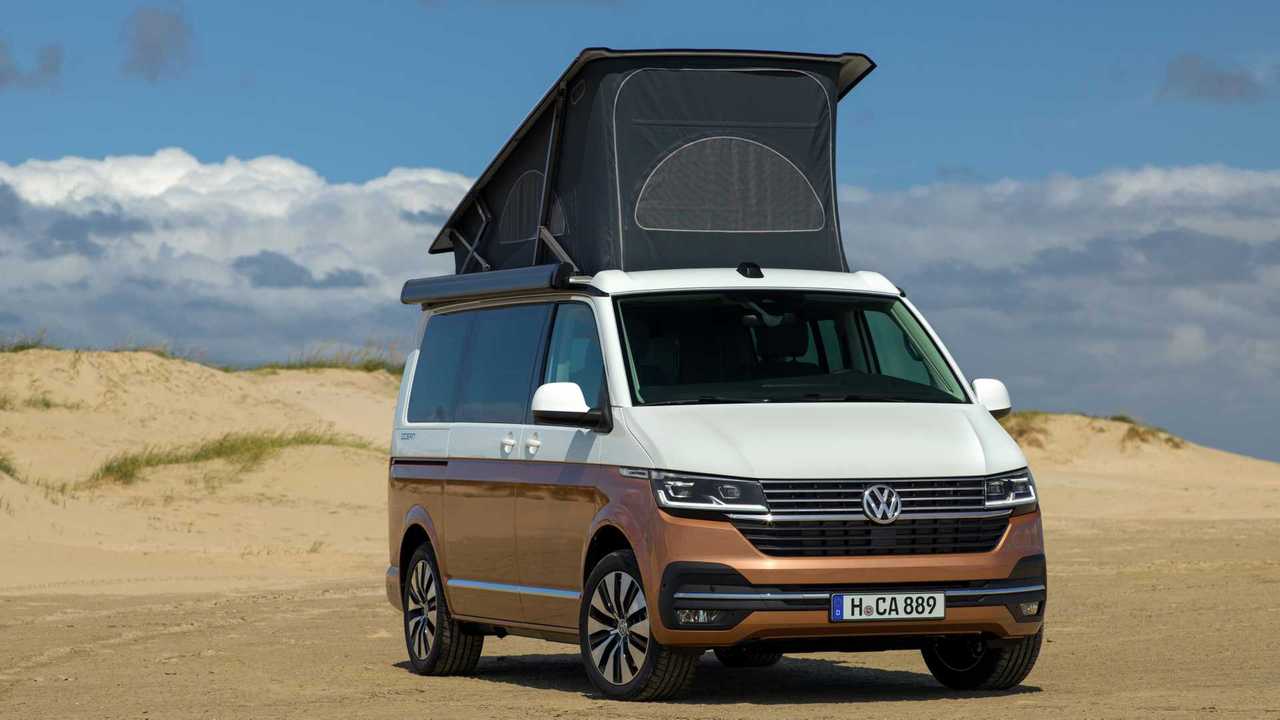 Hanover, 2 August 2019 – Volkswagen Commercial Vehicles will be giving the new California 6.1 its world première at the end of August at the Caravan Salon show in Düsseldorf. Charismatic: the new front. Enhanced: the kitchen units and beds. Digitalised: the new multi-function control panel in the overhead console. Other new features inside the camper van include the optionally digital instruments and the next generation infotainment systems with integrated online connectivity. Rearranged and tailored to the digital world: the instrument panel. New electro- mechanical steering also makes driving safer and easier, as it introduces driver assistance systems such as Lane Assist to the vehicle range.

It's the camper van of choice for globetrotters all over the world: the California, boasting total sales of over 175,000. Now, based on the sixth Bulli generation, comes with a both technically and visually comprehensive update: the California 6.1. The first few images show the California Ocean 6.1, the top version. One of the particularly striking features visually is the front section. The top part of the Ocean's chrome-plated radiator grille forms a single unit with the new LED daytime running lights. Below has a larger air intake for the efficient engines. On the California Ocean 6.1 a chrome strip also adorns the new bumper. Via the chrome elements the Ocean version differentiates itself externally from the Beach and Coast models. In all cases the sharper design emphasises the width of the California 6.1 and makes all versions of the camper look even more serene on the road.

Usable day to day as an MPV, the California has forever impressed with its well thought-out details. In the case of the Coast and Ocean these include a compact set of kitchen units. This has now been enhanced and equipped with new details such as an additional double USB socket. Eye-catching and practical: new aluminium handles on all doors. Also new: push buttons for opening up the kitchen surface (sink, cooker, fridge). The shutters in the rear cupboard have been replaced by newly designed sliding doors; the aluminium handles in keeping with the automotive camper's style are of the same design in the back as their counterparts on the kitchen units. All of the cupboards’ elegant wood grains have also been redesigned: the lighter Bright Oak and darker Graphite Grey. Also matched to the new décor by the interior designers are the new darker seat covers in Palladium Grey.

The beds will from now on provide even greater comfort. The high bed is being equipped in future with a sprung base, while the double rear bench seat that folds out to create a bed can also be transformed into a lounge. Simply fold down the backrest and raise the bed extension at the very back up to the desired height – and hey presto, the interior transforms itself into a cosy lounge for reading and relaxing. Increased protection from too much incoming light is provided by the now darker grey canvas sides of the pop-up roof with integrated top bed. Waking up, meanwhile, is made particularly pleasant by a new sunrise function that uses individually selectable LEDs in the roof and living area to dim up the lights to the desired level of brightness deliberately slowly over a user-definable length of time.

The sunrise function is controlled – like all main camper settings in the California 6.1 – via the newly developed control panel in the overhead console. The previously used monochrome display has been replaced here by a large, full colour touchscreen with considerably more functions. All sorts of information can be accessed via the control panel and numerous features controlled, including the following menu items: ‘Camping’ (mode), ‘Cool Box’, ‘Light’ and the ‘Set-up’ of the system. In the California Ocean 6.1 the pop-up roof, in this case with electro-hydraulic operation as standard, is additionally controlled via the ‘Pop-up Roof' menu and the air heating that also comes at no extra charge in the top model via ‘Auxiliary Heating’. An extremely practical feature is the new ‘Level’ function: a level indicator shows the lengthways and crossways angle at which the California is parked on the campsite. That makes it very easy to get the Bulli level. The sunrise function, meanwhile, is on the ‘Light’ menu and activated via ‘Alarm’.

For the first time, the instruments are optionally digital – the new ‘Digital Cockpit’ on the new instrument panel. The infotainment range has also been reconfigured. It begins with the Composition Audio (line display) and Composition Colour (6.5-inch touchscreen). A further new feature of the California 6.1 is the use of two navigation systems, Discover Media (8-inch touchscreen) and Discover Pro (9.2-inch), from the third generation of the Modular Infotainment Matrix (MIB3). The most important new feature of all systems is an integrated eSIM (optional for Composition Audio). It forms the interface to Volkswagen We and thus to numerous online functions and services. Over and above this the MIB3 systems provide features such as integration of the Apple Music and TIDAL streaming services, natural voice control and App Connect Wireless. Thanks to this new version of App Connect, iPhone apps such as the Media Library and Google Maps can for the first time be incorporated wirelessly into the infotainment system via Bluetooth.

The key technical change in terms of handling is the switch from hydraulic to electro-mechanical power steering. As a result of now having a steering system that can be actively controlled, the California 6.1 will come onto the market this autumn with numerous new driver assistance systems. The extended range of systems includes Lane Assist, Park Assist, a side protection function (warns of obstacles when manoeuvring) and Trailer Assist (simplifies manoeuvring with a trailer). Also included as standard will be Cross Wind Assist; it automatically stabilises the camper van in the event of strong winds.

Volkswagen Commercial Vehicles has also reconfigured the range of drive systems. The California 6.1, which as standard is front and optionally all- wheel drive, will launch with highly efficient 2-litre turbo diesel engines (2.0 TDI), which all fulfil the Euro 6d Temp Evap emissions standard.

Aside from all the new features of the California 6.1, it remains as ever the case that Volkswagen Commercial Vehicles is staying loyal to all the clever details that make this camper so practical and thus ultimately iconic – such as the camping table integrated within the sliding door and the camping chairs stowed in the tailgate.

The world première of the new California Beach, Coast and Ocean will take place at the end of August at the Caravan Salon show in Düsseldorf.