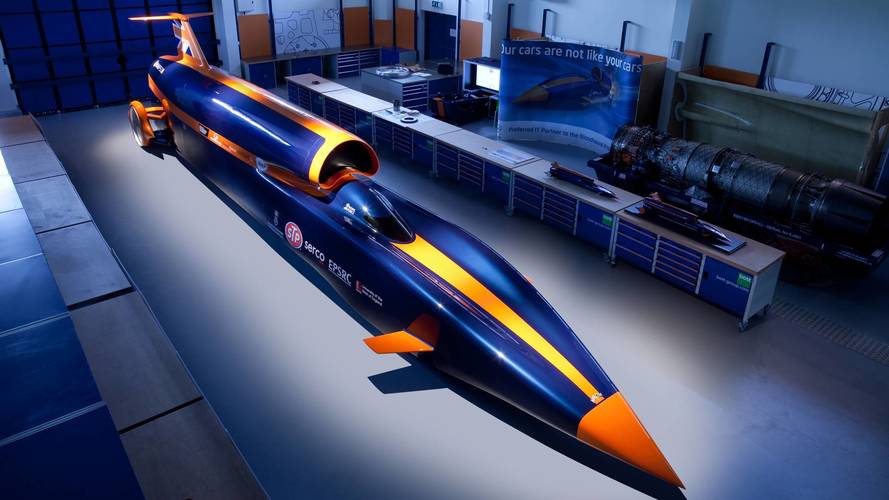 The Clock is Ticking for Bloodhound LSR

Future of the project in jeopardy

The Bloodhound Land Speed Record team, today, announced that time was running out to raise the funding required to attempt the new supersonic world land speed record within the 2021 weather window on the Hakskeenpan, South Africa.

The team has to secure sufficient funding commitments by the end of March 2020 in order to meet the financing requirements sufficient to re-form the team of aerospace and motorsport experts and complete development of the land speed record specification car, which includes the monopropellant rocket, electric oxidiser pump (replacing the 550bhp internal combustion unit), fuel system upgrades, braking mechanisms and winglets on the tail fin.

Following the successful high-speed test programme where the team reached a top speed of 628mph / 1010kmh in the Kalahari Desert, that team together with the jet-powered car and associated equipment is now back at the operations HQ in Gloucestershire, UK. The car has been split apart for cleaning, inspection and maintenance and the EJ200 jet engine removed and returned to Rolls-Royce for storage.

Time pressure
In order to reach speeds above 800mph Bloodhound LSR will need a state-of-the art rocket to run in addition to its EJ200 jet engine. This will be provided by Norwegian rocket specialist Nammo. As part of a research programme for the European Space Agency, Nammo has designed a compact, zero-emissions rocket to be used as a launch motor to put small satellites (known as ‘cubesats’) into space. The size and power of this rocket makes it ideal for use in Bloodhound LSR.

The rocket is a ‘monopropellant’ design that uses concentrated hydrogen peroxide (water with an extra oxygen molecule – H2O2) as the propellant. This is pumped at high pressure through silver gauze, which acts as a catalyst, causing it to decompose (split apart) into super-heated steam (600°C) and oxygen. The steam and oxygen are channelled through a nozzle to generate thrust – at three times the speed of sound (Mach 3) or around 2000mph / 3218kmh. There is no fuel ‘combustion’ and therefore no flame nor any chemically harmful waste generated by the rocket from each run. Bloodhound LSR will be steam powered.

The rocket’s oxidiser, concentrated hydrogen peroxide, has to be stored at cool temperatures. Whilst relatively inert at temperatures around 20°C – typical Winter temperatures for July, August in the Northern Cape, South Africa, it becomes volatile if temperature rises above 50°C. The team experienced 44°C during their visit to South Africa last October.

Ian Warhurst, Bloodhound’s CEO said “The clock is ticking to raise the necessary investment to re-group the team and crack on with the rocket program and other car upgrades in time to hit our 2021 deadlines. If we miss our cool weather window in July and August, temperatures in the Kalahari will make running a rocket untenable next year.

Ian continued; “Independent analysis of the media coverage of Bloodhound LSR’s successful high speed test programme concluded sponsors would have received a 14:1 return on their investment (ROI). Conservative estimates of the coverage for an actual land speed record attempt in 2021 are that it will be at least four times that of high speed testing – and it is likely to be higher. This means the sponsorship opportunity would give a predicted ROI of 18:1 and probably much more. For the first time, we now have a valid ROI figure that sponsors need in order to invest.

“The project remains dormant whilst we try to secure the funding but at a cost of tens of thousands per month of overheads, and the threat that we miss the weather window next year, we cannot remain dormant for long. After all that this project has achieved in the past year to prove its viability, it would be devastating to end here when we are so close. We remain optimistic but really are running out of time”

Bloodhound inspiration
The Bloodhound LSR project continues to inspire people of all ages with cutting edge engineering and technology showcases. The team is currently exploring opportunities to share learnings with higher and further education institutions based on the successful engineering and operation car. The entire lifecycle of the project, from original concept and through detailed design to the build, testing, international deployment, and ultimate safe operation of the car, has enabled the team to assemble a unique case study reaching across a vast array of disciplines. The educational value from primary school through to post university is unequalled by other projects.