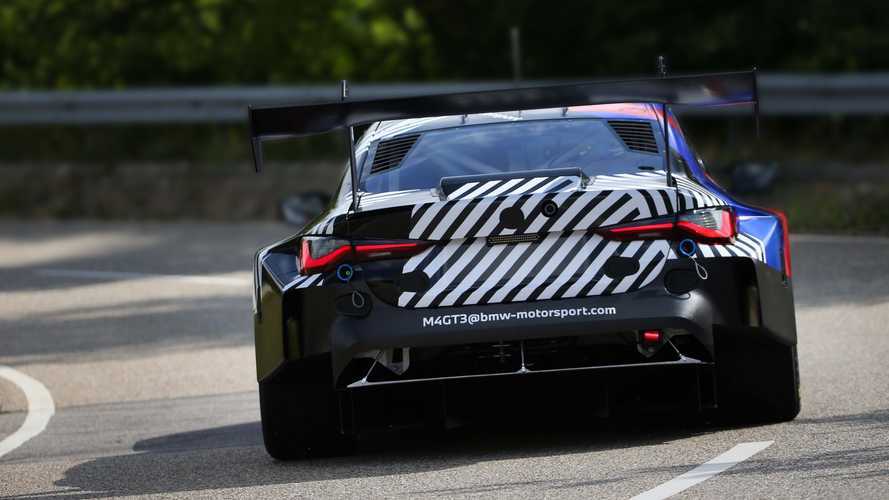 Last Saturday’s rollout of the BMW M4 GT3 at the BMW Group plant in Dingolfing (GER) marked an important milestone in the development of the new BMW icon for the GT racing scene. After months of virtual work, BMW works driver Augusto Farfus (BRA) heralded the next phase of preparations, taking the new car out onto the streets for the first time.

Dingolfing. Last Saturday’s rollout of the BMW M4 GT3 at the BMW Group plant in Dingolfing (GER) marked an important milestone in the development of the new BMW icon for the GT racing scene. After months of virtual work, BMW works driver Augusto Farfus (BRA) heralded the next phase of preparations, taking the new car out onto the streets for the first time. Despite facing many challenges, the BMW M4 GT3 has so far completed all the development steps according to plan and will travel to Miramas (FRA) for initial tests next week.

Farfus rolled out of the garage at the wheel of the BMW M4 GT3 for the first time at 9:40hrs last Saturday and set about completing the first important function tests. The BMW Motorsport engineers spent the whole day putting the new GT car, which will replace the BMW M6 GT3 from the 2022 season, through its paces. The first tests are scheduled to take place on the track at the BMW Group’s test centre in the southern French commune of Miramas next week.

“It is always an emotional moment when a newly-developed BMW race car takes to the track for the first time,” said Marquardt. “This time, however, I am particularly proud. Given the difficult conditions of the past few months, it is quite remarkable that we have managed to implement our development programme as planned, and whilst complying with the BMW Group’s strict safety and hygiene regulations throughout the COVID-19 pandemic, have managed to stick to the date originally envisaged for the rollout of the BMW M4 GT3. I’d like to say a big thank you to everyone who has shown such commitment and the passion we have become accustomed to in the face of the extraordinary challenges faced in recent months, and who have overcome these challenges imperiously. Thanks to the very close and intensive collaboration with our colleagues at BMW M GmbH, we have been able to use the basis provided by the new BMW M4 production model to develop a race car that has everything it needs to continue the successful history of BMW Motorsport as a new GT icon.”

Markus Flasch, CEO of BMW M GmbH: “With every BMW M4, we are taking motor racing technology to the streets. That is particularly true of the new BMW M4 Coupé, which forms the perfect basis for the race car. The straight six-cylinder engine with M TwinPower turbo technology and high-rev concept is used in both the production car and the race car. Our engineers designed the power unit from the outset with performance characteristics derived straight from the world of motor racing. We are confident that this approach will pay dividends in terms of performance and driving pleasure for both our GT3 customer teams at the racetrack and for our customers who purchase a new BMW M4 or BMW M3.”

The race car and production car were developed in parallel, and both are now in the midst of an intensive period of testing out on the track. The production versions of the new BMW M4 Coupé and the BMW M3 Limousine (combined fuel consumption: 10.9 – 10.5 l/100 km; combined CO2 emissions: 249 – 239 g/km, provisional figures) will be launched in September. The BMW M4 GT3 will contest its first races, for the purpose of testing under competitive conditions, in 2021 and will do battle for victory as the new BMW icon on the GT racing scene from the 2022 season. Between now and then, the BMW Motorsport engineers and BMW works drivers still have a lot of development and testing to do.

“It was fantastic and a great honour for me to be able to drive the first few metres in the new BMW M4 GT3,” said Farfus after the rollout. “I have been involved in the development of several BMW race cars and am always particularly pleased to be a part of such an important project. Although our main job during the rollout is to perform functional tests, I had a good feeling in the car from the outset and am already looking forward to the tests scheduled for the coming months.”

The rollout in Dingolfing was a milestone and a highlight of the development process, which began back at the start of 2019 with CFD computer simulations. The engine, generating more than 500 hp, took to the test stand in Munich in February, while initial tests were performed in the BMW Group wind tunnel from the middle of the year, using a 60-percent scale model of the car. The first test chassis of the BMW M4 GT3 was produced at the BMW Group plant in Regensburg (GER) in early 2020. After that, the test car used for the rollout was assembled within roughly six weeks in the BMW Motorsport workshop.